Pirates of the South Seas 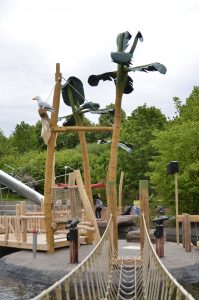 Pirates of the South Seas

In the Playmobil® FunPark the adventure of seafaring is linked with both interactive technology and an inclusive quality of stay in a very innovative way which thus provides a type of adventure which possibly only exists in films.

True, the idea to build a pirate playground is neither fanciful nor innovative. Take a sailing ship, a palm tree, a steering wheel, a crocodile, a nautical chart and arrange the whole of it in an appropriate landscape space. Children will know immediately what to do. Pirates are the most popular and absolute heroes for children. Even if the playing children don’t have a ship, they will as well board a harvester or a simple climbing scaffold.

The history of the Hanseatic League, the adventures of Francis Drake, Klaus Störtebecker or the discovery of the New World are terrific adventures and always exciting for kids.So what could make more sense than setting up an adventure area with a sailing ship and pirates in the midst of a theme park? However, a leisure park needs much more than this. Its attractions must be sensational and should vary significantly from all other similar offerings.

To design a boat of approximately 15 metres height a lot of phantasy and creativity was required from those who had to design and build this area. And it is exactly at this point where the adventurous journey started.

The company Adler & Olesch GmbH, a landscape architect’s office from Nuremberg, was responsible for the project planning of the new play area. So, the landscape architects designed a concept which focused on themes such as a pirate sea, a pirate lagoon, a pirate island. In addition they were responsible for the landscaping as such and the water management. Regarding the concrete design a two-step tendering procedure was implemented. Finally, it was the company SIK Holz® which was awarded the contract.

Already well visible from a distance, the 15-metre-high full rigged yard masts invite to visiting this exciting destination. When approaching the pirate bay from a more elevated location, one will find surprise after surprise. On an area of approximately 5,300 sqm one is faced with a dramatic sea battle. The scenery has the appearance of a genuine adventure world in the midst of the South Seas. Two opposing ships facing each other, a proud Spanish Galleon and a wreck with burst masts and ripped sails are forming the dramatic scene.

In the sand area of the pirate lagoon children are looking for treasures of the former island residents. Three big pieces of wreckage (a ship’s bow, its stern and a pirate hide-out) are equipment elements for the role-playing game, physical activity and, at the same time, for sun protection. The masts and other wreckage pieces were used to build a shack for the children stranded here. To get on board the pirate ship, they have to overcome the ship’s side and rail by using ropes, crossing wobbling bridges and climbing up the rungs.

To get onto the Island of the Damned they have to cross the jungle bridges. It is here where the small pirates fight with water cannons against the besieging players who are getting closer on rafts. It is on the shores where both children and adults can capture rafts to get to the ships.

Of course, also people with specific needs have been taken into account. Barrier-free accessibility and inclusion are of utmost importance when designing playgrounds. Everybody should be able to enjoy playing there. However, any wheelchair driver will need a bit of courage to pull him or herself onto the ferry up to the ship wreck. To cater for them a special guidance system and an inoffensive locking technology have been developed.

The big pirate ship was built three metres below the water level. To this end, a waterproof reinforced concrete basement was cast which at the same time bears the total weight of the ship. Into the resulting 2-metre-deep bilge, the company SIK Holz® designed an authentic staging of black powder barrels, cannonballs, rope ends as well as a brig with exciting effects. Eight portholes have been installed on the sides through which the visitors can observe and enjoy the tropical underwater world. Interactive sound generators create sounds such as the sound of the sea, the commands shouted to the sailors, the creaking of the ship’s side, the rattling of the anchor chain or the distant noise of board gun bullets hitting. At the same time, dim light projections on the walls provide the right mood.

When designing the authentic play elements, it was of utmost importance to maintain the natural character of the wood. Active game offerings are provided in form of climbing, balancing, turning and swinging games which can be played on almost all devices. The pirate shack, the ships and ample seating options on ship boxes, rum barrels and herring barrels on different play levels provide the young visitors with both protected areas and places to get in contact or encourage their senses. Telescopes help to discover the distant areas of the Playmobil® FunPark. In addition, it is very thrilling to ascent the seven-metre-high crow’s nests and to cross the chain bridge to get from one mast to another.

The average duration of stay is relatively long. Both children and adults can spend the whole day long in the park without getting bored. All children coming here will win wonderful experiences while playing with each other in a romantic child-friendly environment.