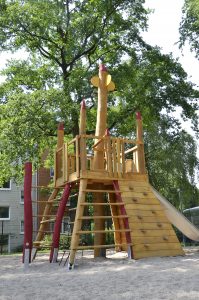 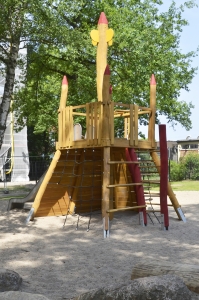 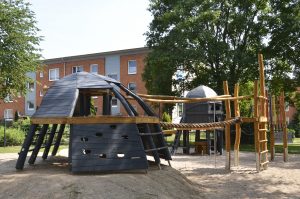 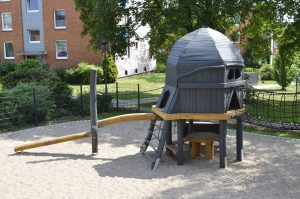 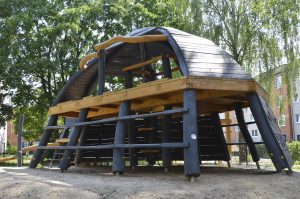 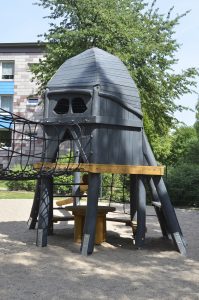 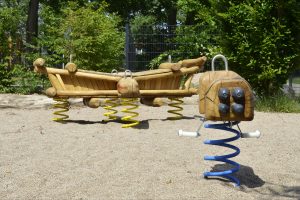 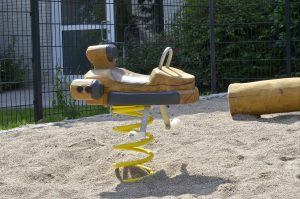 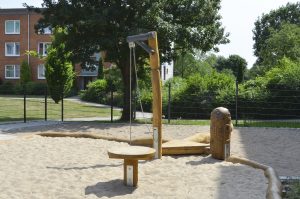 The universe includes everything that exists, space and time, matter and energy. It preoccupies the natural sciences and philosophy and provides plenty of material for fantastic stories that people like to read and play.

Since a few months a galactic backdrop for space games is available on the new created playground on the Goerdelerstraße in Hamburg. The non-profit Wohnungsbaugesellschaft Bergedorf-Bille eG devotes much attention to the renovation of playgrounds in their residential areas with regard to the youngest members. Many of the outdated playgrounds were redesigned according to suggestions, hints and ideas of local residents.

For the outside areas in Goerdelerstraße, Benthin’s office in Neustadt / Holstein planned two large play areas with bordering seating areas and exercise courses for adults. One playing area was designed with the focus on sand play and the other with the focus on movement play by SIK-Holz® consultant Ulrich Probst-Schneidereit. Both play areas also encourage role-plays. In the sand play area it is a small robot and rocking space vehicles.

Three large objects, a space temple, a battle star and a space helmet dominate the large range of motion. All three objects have different shapes and colors. The space temple shines in yellow-red colors, while the battle star and the space helmet recede in an anthracite-yellow color combination in the perception. Latter are connected with a balancing combination. In their middle part are shining colored light swords. The three objects offer large spaces above and below the platforms. Through a variety of entrances and exits, many different exercise offers and play loops arise.