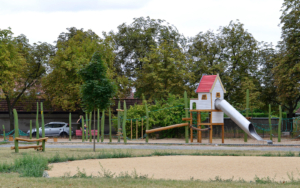 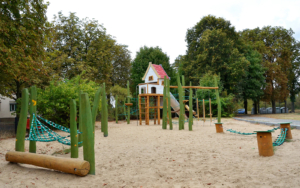 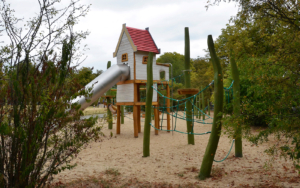 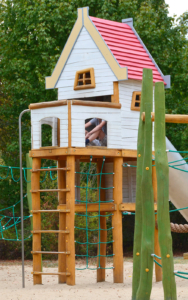 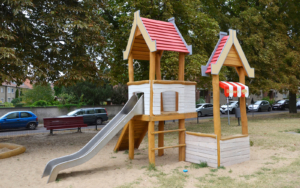 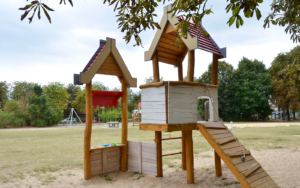 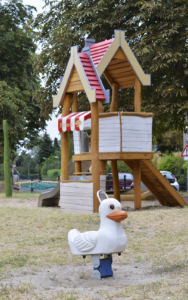 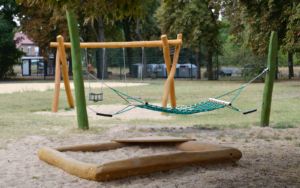 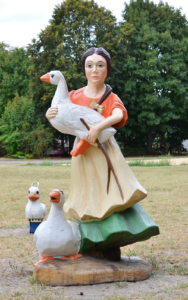 Where geese are there is chatter

A noisy chatter is to hear again in the playground in Ungewitter Weg in Berlin. However, it isn’t the chattering of the wooden geese, these are children who enliven the playground «Gänsewiese». The playground is located on the green belt in the garden city Staaken, which was designed by the landscape architect Ludwig Lesser in the 1920s. It is the central open space in the garden city and is a listed building. For the redesign of the playground, a competition was awarded by the urban green space planning office. After completion of the procedure, SIK-Holz® awarded the contract.

The playgrounds should fit harmoniously into the typical image of the garden city and absorb architectural elements from the surroundings. The settlement was built by the architect Paul Schmitthenner as a model settlement. The floor plans and facades are well proportioned. Ornamental jewelry was largely dispensed with. Specifically, the architecture of the garden city contains references to nearby Potsdam, in particular to the Dutch Quarter. For that reason, a typical Dutch gable was used for the design of the playhouses with the play facilities. All other posts outside the playhouses were designed as grasses, referring to the name of the settlement «Garden City».

The offered play possibilities are separated into two areas, an area for toddlers and an area for children from nearly 6 years. Both areas are located opposite each other at the edge of the green corridor. The central element of the toddler’s area is a multi-functional playhouse with different ascents, slides and a built in shop. Around it seesawing geese are posing and they are guarded by the life-size sculpture «Goose Lizzy». Swing, hammock and sandpit make the game offer complete. For the older children, the central playhouse is correspondingly higher and less accessible. The grassy course around the playhouse offers many climbing, balancing and gymnastics options. Large and small nets, as well as sprawling benches invite you to rest.